In early 2017, painted signs began to pop up on utility poles around the island that I live on, Tortola (which is in the British Virgin Islands in the Caribbean).  The signs measured around 2 feet high, and included cats, fish, the sun and the moon.

My favourite was a red heart with the letters ‘BVI’ painted in the centre in yellow letters, on a tree in Sea Cow’s Bay. Initially  the reaction to the signs seemed to be that they were rather jolly.  Readers’ comments on news sites and social media about the street art were largely appreciative: “as opposed to the sewage smell in town, these signs are a breath of fresh air“. But not everyone liked the signs.  After some months, the identity of the artist was still a mystery. Local newspapers reported that no one knew who had put them up and some people reported that the cats’ eyes seemed to glow or glitter at night. A few people began to get spooked.  There were concerns that the signs were the marks of obeah (witchcraft), with comments on social media like, “these devil people mehson“. Bishop Cline of the Baptist Church at Duff’s Bottom (which I promise you is a real place name) even condemned the signs as satanic.

Obeah (and related traditions of Santeria in Cuba, or Voodoo in Haiti) do of course exist in the Caribbean.  Equating them with devil worship is perhaps a bit of a shame: they derive from spiritual and religious practices in West Africa, sometimes blended with a dose Christianity.  Enslaved people in the Caribbean were forced to convert to Christianity, but the older traditions persisted in secret.  Obeah men were a dangerous challenge to the authority of plantation owners. Naturally, colonial powers tried to suppress the religion among enslaved people.

Even more recently, under the 1904 Obeah Act, any person practising obeah or the ‘subtle crafts’ could be imprisoned or (for males) whipped. Even types of spiritual practices that might pop up on your Instagram feed (or is that just me?) were criminal:  any person pretending or professing to tell fortunes could be imprisoned for up to six months, and the same went for trying to ‘effect purposes’ by means of incantations.  The Obeah Act was repealed in 1997, so I can breathe easy about the books on Buddhist chanting and tarot reading on my shelves.  Nor do we need to look into laser removal of my boyfriend’s tattoo (which includes a bow and arrow denoting Sagittarius) lest he be thrown in the clink as a warlock.

This may seem a bit OTT to anyone brought up in the tea-and-cakes, mild-mannered culture of the Church of England. But BVI is a spiritual society, where many people believe God and the Devil are working in the world.  An Old Testament God stalks the Caribbean, wreaking natural disasters but also bestowing great strength on those who call to him through prayer.

Among some people, the possibility of the devil working in the world through the dark arts is real. For example, in 2012, a decapitated pig was found on Tortola, prompting rumours that local politicians had dabbled in obeah to influence elections.  While pig-bothering by politicians may come as no surprise to my British readers (who are used to that sort of thing), clergy in the British Virgin Islands denounced obeah, reminding their flocks that “the devil is real” and that obeah is the work of Satan and his demons.

In the months following the appearance of the signs, some people  called for them to be removed.  The ‘BVI Community Board’ Facebook group included comments such as, “I tell aya is witchcraft“.  The signs were blamed for an uptick in murders in the territory, and for the terrible flooding in August 2017. They were even blamed for devastating hurricanes Irma and Mara in September 2017.

People denouncing the signs were by no means a majority, with many others commenting that they liked the signs or objecting to them simply on the basis that the artist had not obtained permission for them.  Eventually, some of the signs were removed, and those same hurricanes they were said to have caused must have torn down the last of them. And so, for a over a year, there were no more of these colourful signs. 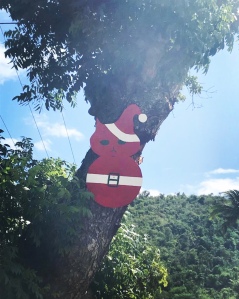 However, on Saturday, I noticed a new sign (pictured), this time of a Christmassy Cat. It is in exactly the same spot as my old favourite.  As I pointed it out to my boyfriend, he joked, “that means we will have another hurricane“.  And although I laughed, a tingle went down my spine for a moment and I told him not to tempt fate…  I guess we are all superstitious sometimes.