Have you seen Jonathan Sumption’s Sunday Times article? Probably because of the stature of the author, the article has been niggling away at me since I read it. By ‘stature’ of course, I don’t mean how tall he is, I mean how clever he is. We’re talking about the cleverest man in England here. In his article titled “Set us free from lockdown, ministers, and stop covering your backs“, Lord Sumption suggests that the UK should never have put a lockdown in place, because the current circumstances do not justify violating citizens’ liberties.

It seems to me that the article takes for granted that in a lockdown-free UK, everyone will be free to try and avoid catching the bad COVID if they want. But it also assumes that enough people will freely and happily carry on as normal, so that the wheels of commerce will keep turning and the economy will be saved. Yay!

If only that were true.

An individual’s range of choices and freedom are dictated by more than just the letter of the law. This is an age-old area of debate, so apologies if the following seems a bit ‘GCSE politics’. Actually I haven’t even done GCSE politics, as may be about to become abundantly clear. Anyway, the way I see it, there are two forces pulling at the debate about personal freedom:

Most people would agree that a balance between the ideologies is needed, although there is a range of reasonable disagreement about where the line should be drawn. Remember the fuss about introducing seatbelts? And let’s not get started on drink driving limits.

Anyway, the point is that Johnathan Sumption is not remotely stupid. He has probably done at least GCSE politics or equivalent, what with being a law lord and all and having the title “The Rt Hon Lord Sumption, OBE, FRHistS, FSA”. But instead of talking about finding some balance between types of choice, he has chosen to omit from his article any discussion of other factors affecting personal freedom, instead writing that “those who do not want to run the risk of being infected can isolate themselves voluntarily“.

And that niggles at me. Not everyone can choose. In an lockdown-free UK, there would have been no excuse not to go to work. Teachers, healthcare workers, transport workers… they would have had little or no control over the risks they faced. Too many healthcare workers have already died.

And that’s not all. Because of coronavirus, NHS patients are currently being denied treatment that would have extended their lives. Would more patients have their treatments refused if coronavirus was running unchecked through the population? Likely. Would people suffering from other medical conditions be afraid to go to hospital? Also likely. That doesn’t look like freedom to me.

Living in BVI has almost been like living in a hypothetical example. It’s a country so small that extreme measures could be put in place quickly, and cause and effect can be quickly seen without drowning in damned statistics.

We had an early, incredibly strict curfew, imposed as soon as the first case in the territory was confirmed. We were not allowed to leave our homes for any reason at all (not to get food, not to exercise, not to go to a pharmacy) for about 4 weeks. For the first two weeks of that period, even delivery of groceries was prohibited. Basically, everything was shut except the hospital and the police stations. Without a shadow of a doubt, this represented a serious incursion into our civil rights. The restrictions on movement were combined with testing and contact tracing.

Following that curfew, there doesn’t seem to be much, if any, coronavirus remaining in the territory. There is only one known active case, a person who is recovering in quarantine. One can only assume that the apparent elimination of COVID-19 from BVI is the direct result of the draconian measures put in place. But I don’t want to come over all Republic of Gilead about it. Elements of the curfew have been alarming: the magistrate dished out hefty custodial sentences to some curfew breakers, and three people have been tasered by police in relation to breach of anti-COVID measures.

Because COVID now seems to be under control (knock on wood, cross fingers, pray to God), the curfew has now partially lifted so that pretty much all businesses can operate between the hours of 6am and 7pm.

A few of things to take from this:

First, I don’t think it’s right to set up the idea of lockdown in total opposition to the economy. No man is an island (even in BVI). A small territory cannot stop the economic impact of a global event like this by just keeping calm and carrying on. It will affect you anyway.  I think it’s fanciful to imagine that, if BVI’s borders were still open, cruise ships would still be popping in to shop for duty-free watches and rum punches. Even famously ‘lockdown free’ Sweden has been hugely affected economically and there are reports that Sweden’s economy will fare no better than its European neighbours.

Second, my range of choices has been increased by the fact that the BVI government took early, decisive action to control the spread of COVID.  Here are a few things that I feel safe enough to do today (while taking precautions): 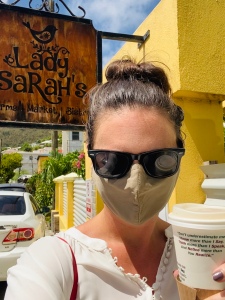 There are a few things I’m still not comfortable doing, like getting my nails done, going for a haircut or socialising in larger groups. But I know lots of people who are doing those things, which I’m pretty sure they wouldn’t be if corpses were piling up in the morgue.

It seems like a short(ish) sharp shock has made certain activities safer. As we go about our daily lives in accordance with our personal risk assessments (as Lord Sumption would like us to) it feels like there are more options sensibly open to us. 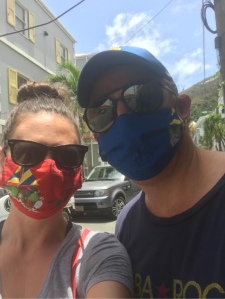 Running an errand with my husband (i.e. collecting pizza)

Third, I have seen what happens when society starts to fray at the edges after a natural disaster. I was on this island when Hurricane Irma hit. The next day, we saw people looting shops in broad daylight, dragging cases of food and water over rubble. Understandable perhaps. Less understandable when TV sets started getting carried out of smashed up shops. When the faeces* really hits the fan, normal commerce is affected. We do not know what happens when a country does not put any lockdown measures in place**. But assuming it could look a lot worse than the awful scenes from Italy, it’s not a stretch to imagine panic and civil unrest. Not good for business.

All that said, I do agree with Lord Sumption (as I’m sure he’ll be very relieved to hear) that draconian limits on human rights must only be imposed where there is a clear and imperative justification. They must be limited to what is strictly necessary, and they must be lifted as soon as possible. But perhaps the choice isn’t about whether to impose a lockdown at all, but when and how.

BVI hasn’t solved it, though

The reopening so far is an ‘internal reopening’ only. The borders are still shut to visitors.

And while most businesses have reopened, any business that relies on tourism is in real trouble. There is a 7pm curfew. Restaurants can only open for takeaway. Boats aren’t allowed on the water. And more to the point, there are no visitors here.

In particular, restaurants and bars are struggling. A lot of them are still recovering from the damage caused by Hurricane Irma and are losing money hand over fist on rent. In some cases they are trying to find money to feed their now unemployed staff. There are only so many beach bar burgers that financial services workers can eat in order to try and keep local restaurants afloat (although by God, it looks like my husband will make a valiant effort to do it). Boat crew, taxis, holiday home rentals, hotels etc. will all be doing zero business at the moment.

The territory will be under enormous pressure to open its borders to visitors (and without quarantine) later this year. Further outbreaks and lockdowns cannot be ruled out. Any why not add into the mix the real threat of natural disaster – weather forecasters predict an active hurricane season this year, just to spice things up even more.

So, no, the BVI is not sitting pretty. But, and at the risk of straying into armchair epidemiology, I believe things would be much, much worse if there had been no curfew. And I am thankful to everyone (not just the Government and the Governor, but also everyone who stayed at home) who has worked to keep us safe over recent weeks.

Sorry that this was a heavy post. The next one will probably be about yoga or cats or something.

* I said faeces instead of shit because I’m trying to keep it classy in a blog post that mentions Lord Sumption.

**Even Sweden closed its secondary schools and banned large gatherings.

One thought on “Emerging from curfew”